Treffen at the American club proved why you should visit Wisconsin

It’s an old story. The middle of the country never seems to get its due. It’s a pity. While it might lack the in-your-face majesty of the Rockies or the Sierras, Eastern Wisconsin has a unique and accessible charm all its own. During Treffen at The American Club, that appeal extends from the host hotel itself to the landscape and the terrain (and the roads), which are some of the most interesting to be found anywhere. It all adds up to a Treffen experience that takes a back seat to none. 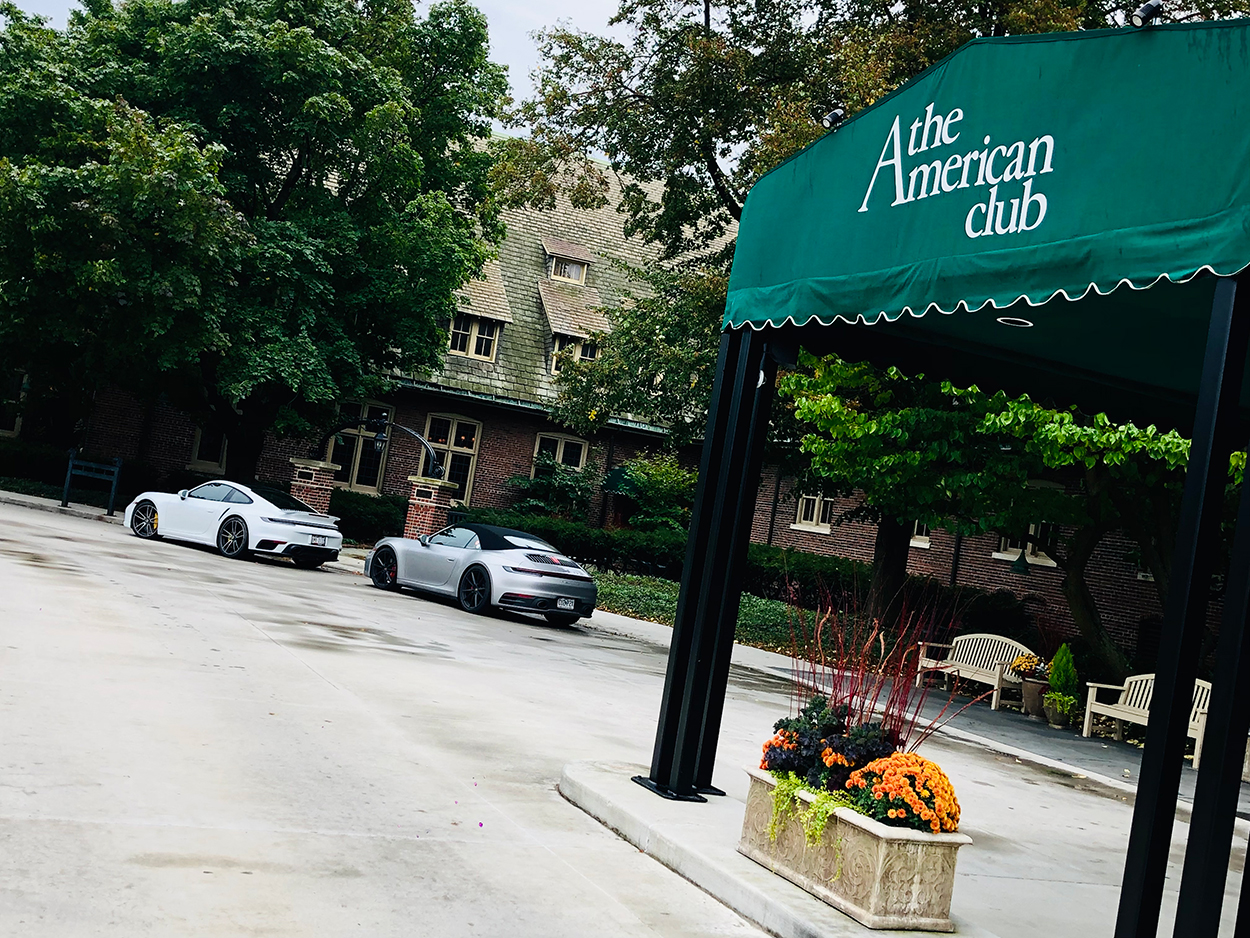 Home base was The Village of Kohler, and if that name sounds familiar, it should. On average, you may look at it 10.5 times a day if your bathrooms are equipped with the fixtures that originate there. Kohler is still very much a classic company town, with the Kohler Company maintaining final say over almost every aspect of its aesthetics. 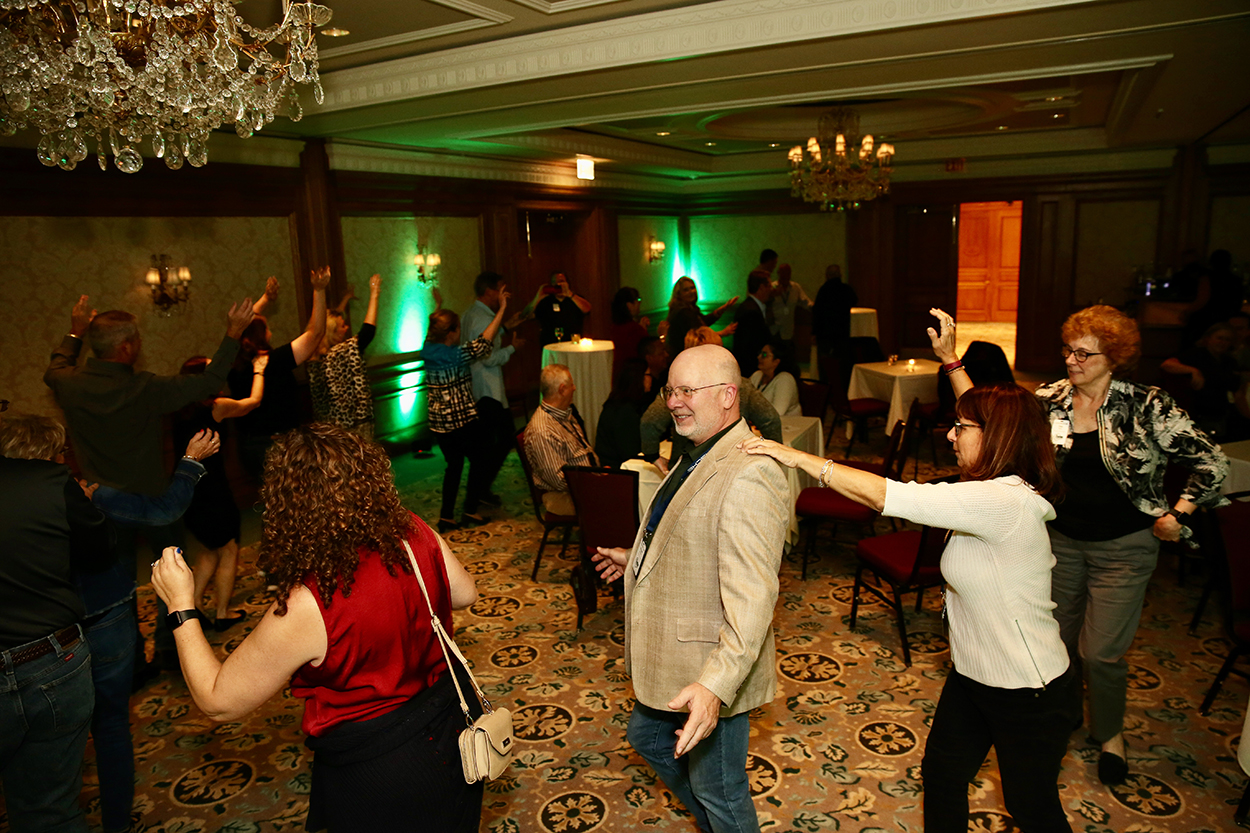 After-dinner party at the KEF Lounge.

The American Club where PCA took over in almost a mini-Parade fashion is run by the hospitality division of the Kohler Company. Built in 1918 to house immigrant workers at the bathroom fixture plant, it’s now the Midwest’s only AAA Five Diamond Resort Hotel, and it’s a perennial Top 100 Conde Nast Traveler golf resort. The Tudor Revival structure is also on the National Registry of Historic Places. As one would expect, the rooms are large, decorated traditionally (with each themed for a great American), and not surprisingly, contain some of the best-equipped bathrooms in the entire hospitality industry. The Kohler Company wouldn’t have it any other way. 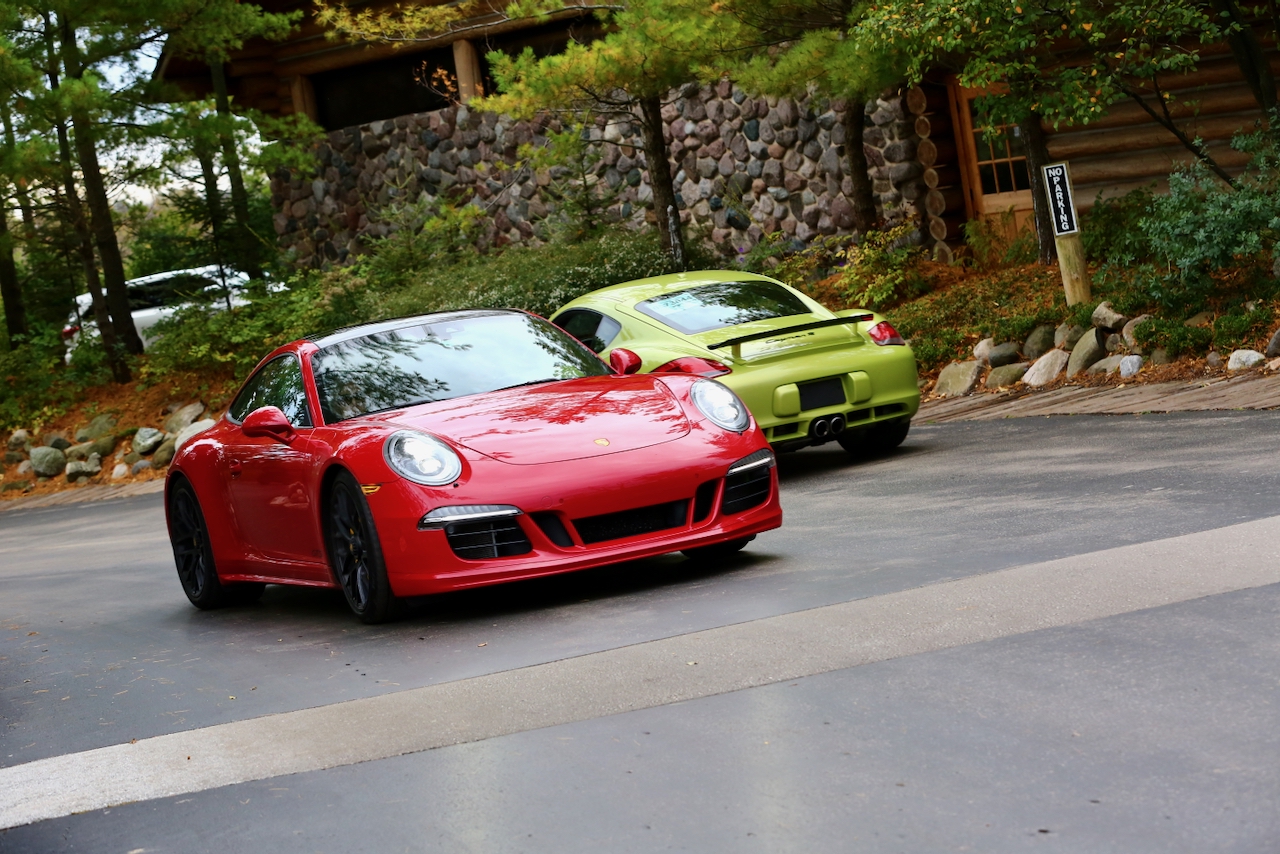 The tours delivered everything that you’d expect on a high-end driving getaway. Treffen coincided with peak fall colors in the upper Midwest, and honestly, that would have been more than enough. Sheboygan and Door Counties, however, contain some of the most charming vacation towns to be found in the region. Fish Creek, Ephraim, and Egg Harbor are legendary for their fish boils and Norman Rockwell-style appeal. If you do a little research about the area, though, it gets even more fascinating. The landscape (including Lake Michigan) is a pretty recent thing. Unlike the Rockies, or the Grand Canyon, nearly everything that you see on the tours is a product of the end of the last Ice Age, a little over 10,000 years ago. The odd Kettle Moraine formations, the crazy elevation changes, and the bluffs are all the result of glaciers melting, receding, and leaving detritus that they pulled along with them. 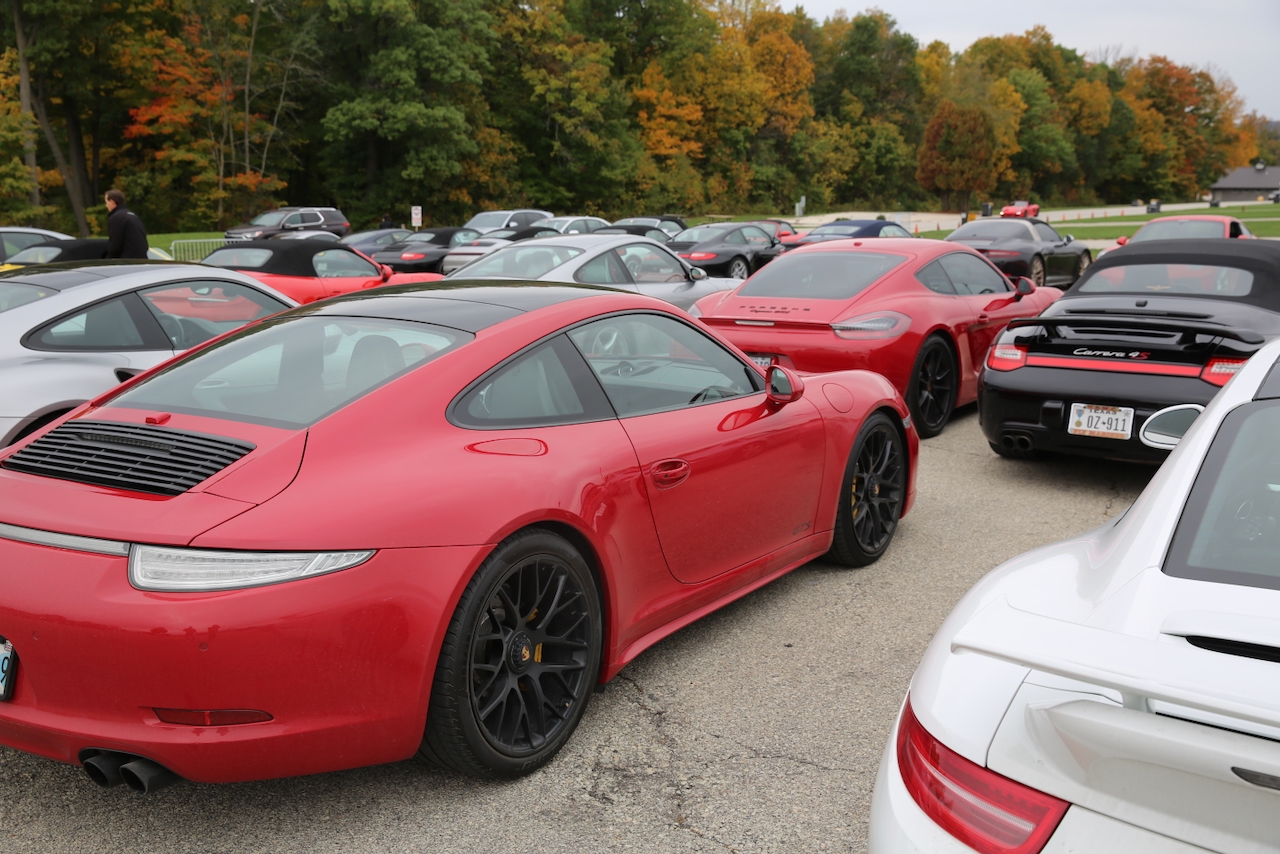 In addition to fish boils and fall colors, one of the tours included a trip to the EAA (Experimental Aviation Association) Museum in Oshkosh. For whatever reason, there seems to be a good-sized overlap of car people and aviation people in PCA. 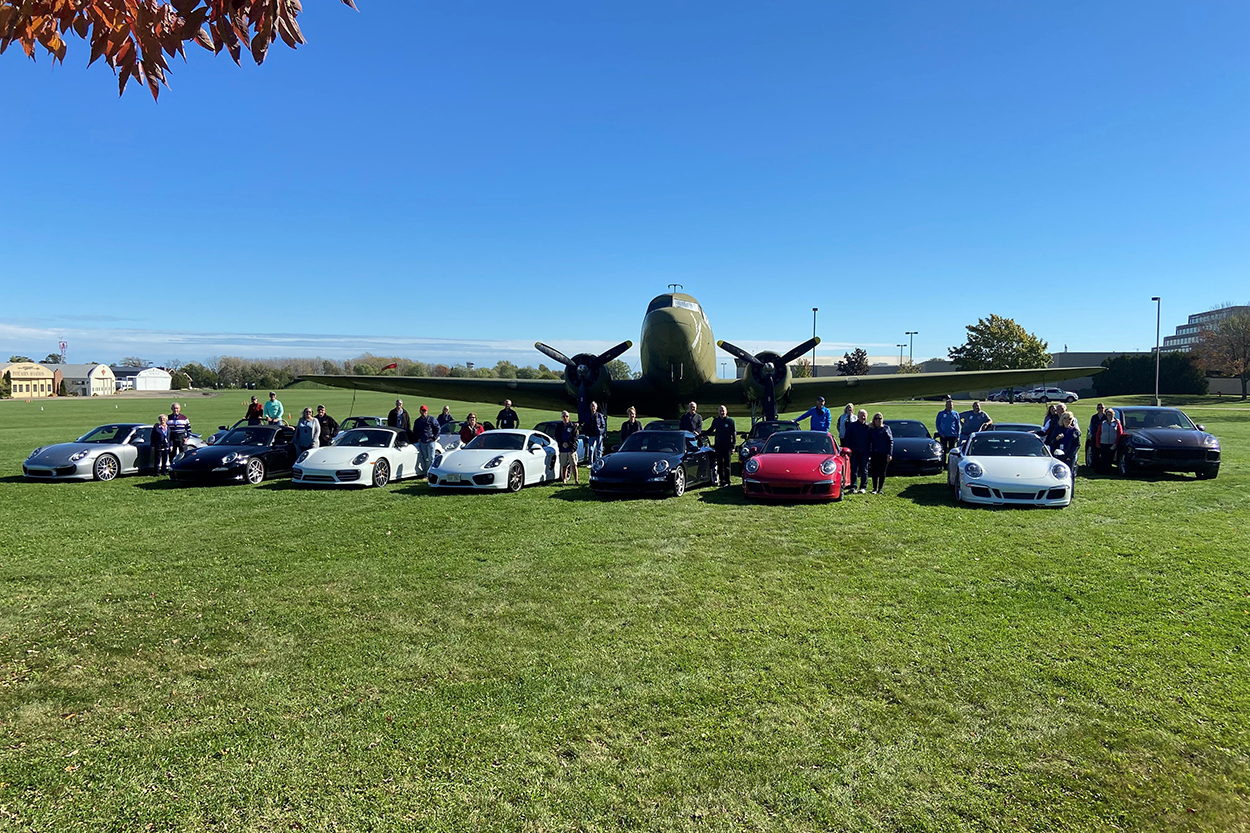 The tour of the museum was well attended, and in addition to having some interesting oddities like the world’s smallest plane, and some obscure but interesting air racers, for WW2 buffs, there is the only remaining XP-51 Mustang prototype, a Lockheed P-38 Lightning, and a rare DeHavilland Mosquito. Cool stuff, to say the least. The crown jewel of the region is one of America’s finest road-racing courses, Road America in Elkhart Lake. Racer Randy Pobst was along to share some stories about driving on the course, which he compares to a small slice of the Nurburgring. Two parade laps capped off a field trip to the course where everyone got a little taste how diabolical The Kink and Canada Corner can be.

Above: Racer Randy Pobst (left) attended the event and spoke to members about racing at the world famous Road America.

Much like Parade, Treffens aren’t regional events. People travel long distances to attend. Panorama contributor Nathan Merz flew out to the national office with his wife Suzi to pick up a hotrod Boxster that he bought on the East Coast. They drove the car to Treffen, and as I write this, they’re on their way back to home in the Seattle area. The Fox Valley and Milwaukee Regions were our hosts, and they supplied 76 volunteers to assist 234 participants from 32 states and 57 different Regions. Everyone left with a sense that the upper Midwest is the antithesis of flyover, or drive-through territory. 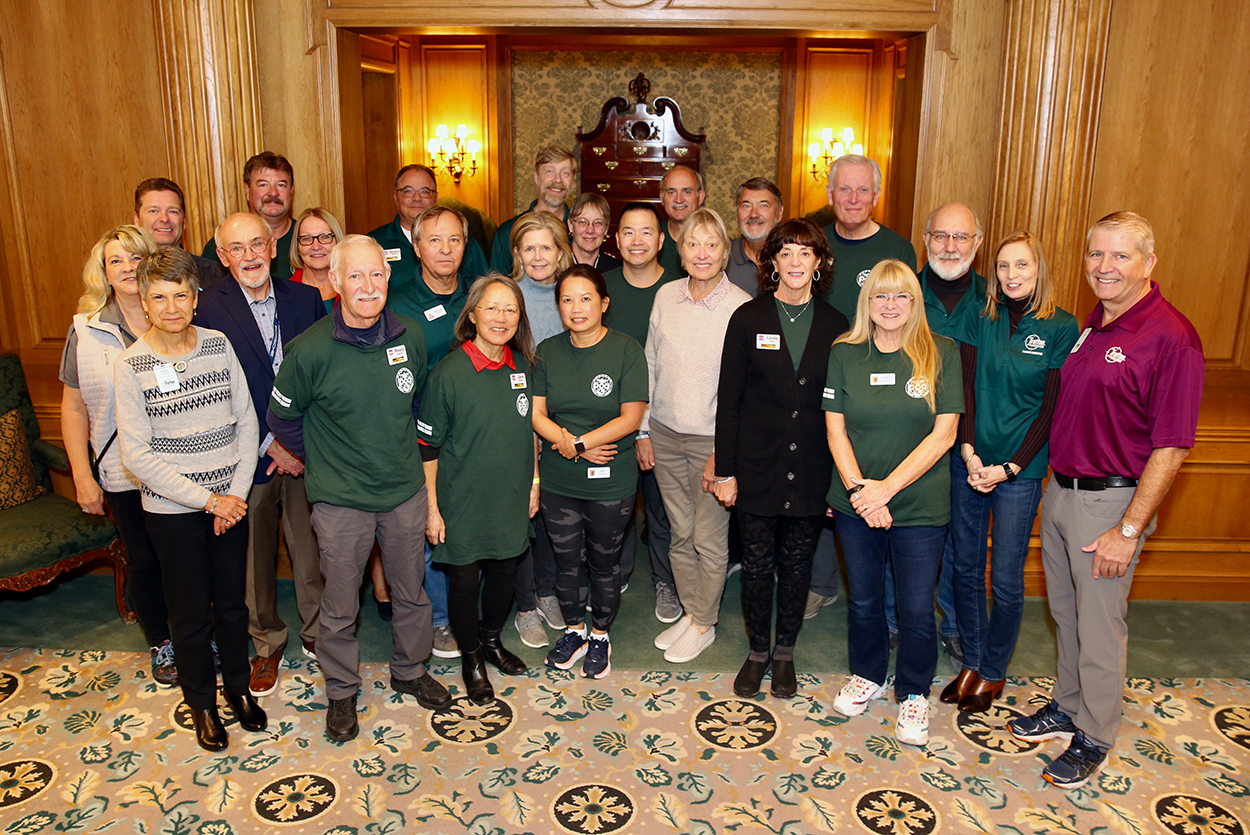 Treffen North America would not be possible without volunteers. Many thanks to the Fox Valley and Milwaukee Region volunteers and the National Treffen Committee who made the event run smoothly.