Everything Porsche celebration at Harley a big success 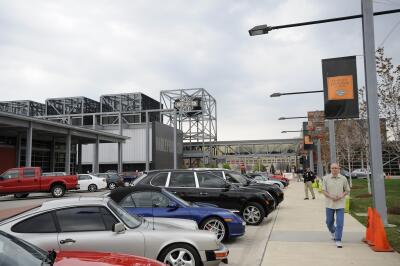 More than 140 Milwaukee Region members marked the 50th anniversary of the region’s PCA charter on April 30 at the Harley Davidson museum, one of Milwaukee’s premier locations.  More than 50 Porsches filled two streets on the museum grounds, creating an eye-catching display.

A brief ceremony noted the importance of the day, April 30, 2010, when exactly 50 years ago a petition of 10 men was approved by PCA to start a Milwaukee Region. One of the region’s founding members, Harold Zimdars, was among the special guests at the event. Hal recalled the fun the founders had as they built the foundation for a strong region. Shortly after the region was formed, Milwaukee had lost its sole Porsche dealership. “We found ourselves a PCA region without a local dealer.” As Porsche popularity grew in the mid 60s that soon changed. To view the region's original petition, with the signatures of the 10 founding members, click here.

Zone 13 rep Ken Hold and his wife Adell joined the festivities. Ken congratulated the region on its milestone and passed along PCA’s kudos.  “How do you start the next 50 years?” Ken asked. “You’re already on your way to mark another 50 years of exemplary PCA involvement,” he said, noting the region’s activity the following day, a community outreach in which members displayed their cars at a veterans’ hospital. A week later, the veterans were to be treated to rides in members’ Porsches on the track at Road America during a break in the region’s driver education event.

During the event, Tom Spiegel was recogized as the region's senior member with 47 years of active membership.

Todd Roberts was recognized for assisting with the evening's event and for developing the region's new logo.

The region’s year-long 50th celebration continues with a driving tour, Brian Redman at Porsche Park during the Kohler International Challenge at Road America, autocross, concours d’elegance and a black-tie optional banquet in September. All details of the events related to the 50th are on this website.

Here's compilation of video clips from the 50th anniversary celebration on April 30, 2010, at the Harley Davidson museum.

Gary Messing, who along with Ron Pace co-chairs the 50th anniversary committee, welcome everyone to the event: http://www.youtube.com/watch?v=Wstu8-BfSoo

Don Kiepert provided a brief history of how PCA got started in 1955. http://www.youtube.com/watch?v=ookSJJjLC_4

Don continued with how the Milwaukee Region got started, five years later in 1960. http://www.youtube.com/watch?v=Pr6Wi_nqj5Y

We were fortunate to have one of the founding members Hal Zimdars with us for the event. Hal shared his thoughts from the early days of the founding of the region in these two clips. http://www.youtube.com/watch?v=63rn8nAos9otOYo63RM

Ken Hold, Zone 13 representative for PCA, attended the event with his wife Adell. Ken presented the region with a citation commemorating its 50th anniversary and added his thoughts. http://www.youtube.com/watch?v=pldZoIymThc

Tom Spiegel was honored during the festivities as the current longest active member in our region, with 47 years of continuous, active membership. Tom, with his wife Jan, accepts an award from Don Kiepert in this video. http://www.youtube.com/watch?v=vGR5GaFeubE

For more photos of this historic event, visit this page.