above photo by Donna Daufenbach

The Milwaukee Region’s 50th anniversary finale on Sept. 25 was all that had been promised, and more.

All of these elements contributed to a wonderful evening at the Wisconsin Country Club:

The 50th anniversary finale concluded a year long schedule of events that began in February with Turbo Spaghetti and continued with a two-day Hallenbeck Drive into Spring driver education at Road America, a day long Spring driving tour, a special event at Porsche Park during the Kohler International Challenge with Brian Redman, a Show and Shine concours at International Autos-Waukesha, and an autocross at Miller Park featuring free runs for novices and a catered picnic lunch.

Caren Cooper, PCA national secretary, presented a 50th anniversary flag to the region on behalf of her fellow national officers. Cooper noted how special it was for a region to be observing 50 years. “Many don’t make it this far,” she said. She also complimented the region on the variety of activities that the club offers it members.

Gene Bussian, who was a founding member of the Chicago-Milwaukee region, shared his memories of the earliest days of PCA formation and the challenges that Porsche lovers had in finding dealers from which to purchase their Porsches. The crowd particularly enjoyed his story of a test drive that he and some friends took in a 356 at a dealer in Oshkosh. The friends were quite familiar with a turn on one of the streets in the area. When they took the car back to the dealer, they pointed out that the speedometer on the 356 was “off by about 15 miles.” No, the dealer said, it wasn’t. The young men had never taken that curve at such a speed in any vehicle before. They immediately asked to take another test drive.

Bussian also noted that the Chicago-Milwaukee region caught the attention of the national PCA because of the ice races that the members had on lakes in Wisconsin. 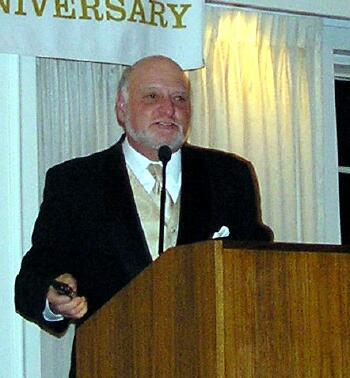 Author, journalist and race driver Burt Levy, left, captivated the audience with an entertaining slide and video show that chronicled his years of involvement in the world of sports car racing which forms the backdrop of his novels featuring Buddy Palumbo, his main character who is a garage mechanic with racing aspirations. Region member Jim DelBalso was sporting a Buddy Palumbo button at the event, testifying that he’s a loyal Levy fan.

Many in the audience had read Levy’s works and already owned his books. Many went home with his books, too. His stories included memories from hours spent at Road America and post-race gatherings at Siebkins in Elkhart Lake. Levy often got recruited to be part of driving teams in sponsored cars so that he could write about the team or the car. His hilarious stories included experiences in a TR3, GT 40 Mark II and even a Ford Pinto. Follow Levy on his website: Last Open Road.

The evening came to an end all too quickly but it was indeed a checkered-flag finish for a region celebrating 50 years of camaraderie and Everything Porsche.