He developed the world's first hybrid car, advanced electric car, and all-wheel drive car a century ago, and now Porsche brings a recreation of his Semper Vivus to New York 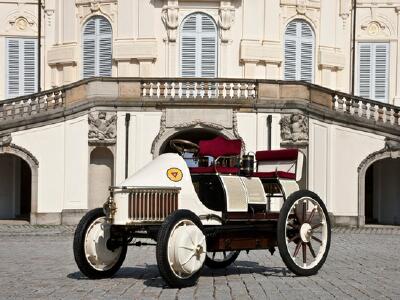 NEW YORK – April 20, 2011 – The name Porsche has been associated with pioneering automotive engineering innovations since the beginning of the last century. In 1900 Prof. Ferdinand Porsche unveiled his Lohner Porsche, an electric car with wheel-hub motors driving the front wheels. Soon after, this car featured all-wheel drive and four-wheel brakes, another world first. A highlight of his early years as an automotive designer was the Lohner-Porsche Semper Vivus that went down in history 111 years ago as the first functional hybrid car.

Porsche’s Semper Vivus (Always Alive) recreation is a tribute to Prof. Porsche’s visionary invention. The fully functional Semper Vivus replica, based on original drawings and exhaustive research, is a collaborative effort between Porsche Engineering and Karosseriebau Drescher, a coachbuilding company based in Hinterzarten in the state of Baden-Württemberg, Germany.  This faithful replica, whose visionary design impresses to this very day, is on display at the New York Auto Show press day on April 20.

The history of the Lohner-Porsche Semper Vivus

Prof. Ferdinand Porsche was busy designing and developing his cars as early as 1896. The first fruit of his endeavors was an electric vehicle known as the Lohner-Porsche. It was driven by steered wheel-hub motors, and it caused a sensation at the Paris World Exhibition in 1900. This was soon followed by an even more impressive example of Prof. Porsche innovative spirit. A racing car boasting four wheel-hub electric motors became the world’s first all-wheel drive passenger car and marked the automotive engineering debut of four-wheel brakes. No less visionary was Prof. Porsche’s next idea; in 1900 he combined his battery-powered wheel hub drive with a petrol engine, thus creating the serial hybrid drive principle.

Prof. Porsche had entered uncharted territory with the Semper Vivus, the world’s first functional, full-hybrid car. In this vehicle, two generators paired with petrol engines formed a single charging unit, simultaneously supplying electricity to wheel-hub motors and batteries. In autumn 1900, Prof. Porsche set to work on a first prototype with petrol-electric hybrid drive. Presumably he based the world’s full hybrid car on a conversion of his electric racing vehicle from the Semmering-Bergrennen race. To this end he combined his electrical wheel-hub motors with two combustion engines and no mechanical connection whatsoever to a drive axle. Instead, they each drove an electric generator supplying both the wheel-hub motors and accumulators with electricity. This was the birth of serial hybrid drive. As a full hybrid concept, the Semper Vivus was also able to cover longer distances purely on battery power until the combustion engine had to be engaged to recharge the batteries.

To save weight and create room for a petrol engine, Prof. Porsche swapped the original 74-cell accumulator in his electromobiles for a smaller battery with only 44 cells. In the middle of the vehicle he installed two water-cooled 3.5 PS (2.6 kW) DeDion Bouton petrol engines -- driving two generators to create electricity -- each producing 2.5 hp (1.84 kW). Both engines operated independently, each delivering 20 amperes with a voltage of 90 volts. The electricity generated by the dynamos initially flowed to the wheel-hub motors, with the surplus power being sent on to the batteries. An added bonus was that it was also possible to use the generators as electric starter motors for the petrol engines by reversing the direction of rotation.

In practice, Prof. Porsche still had to contend with the principal problem of his wheel-hub cars – the vehicle’s heavy weight. Although the Semper Vivus hybrid car’s total weight was only 70 kg more than the original version, the 1,200 kg prototype was a challenge for the pneumatic tires’ soft rubber mix. In other respects as well the hybrid concept was still a long way away from being ready for series production. With its bodiless chassis, exposed petrol engines and unsprung rear axle, the Semper Vivus may have impressed visitors to the Paris Motor Show in 1901 but potential car buyers must have felt the bare-bones prototype was not for them. The interaction of engine, batteries and control system also still needed a lot of development and in addition to the ambitious control technology, a constant problem was dirt being thrown up and fouling of the accumulators. Yet the hybrid concept pointed to new possibilities that Prof. Porsche resolutely set about turning into reality.

In 1901 Prof. Porsche developed the revised concept of his ‘petrol-electric hybrid car’ into a variant that was ready for series production under the Lohner-Porsche Mixte name (borrowing the French term ‘voitures mixtes’). With a four-cylinder, front-mounted engine, this model mirrored the Mercedes vehicle concept just recently designed by Wilhelm Maybach but with its two wheel-hub motors still conforming to the concept of a serial hybrid car. Prof. Porsche was now using a powerful 5.5-liter, 25-hp (18 kW) four-cylinder engine from the Austrian Daimler engine company as an electrical generator. The engine was connected by a driveshaft to the electric generator located under the seat, with control handled by a primary controller next to the steering wheel.

To solve his vehicles’ weight problems, Prof. Porsche was constantly reducing battery size while also attempting to design a dust-proof battery housing. While the Lohner-Porsche Mixte was only able to drive a few kilometers on electric power alone because of the reduced battery capacity, the unladen weight of the four-seat touring car including body fell to around 1,200 kg. In normal driving mode the petrol engine and generator ran at a constant speed, feeding the wheel-hub motors and battery with electricity at a constant voltage. In addition to his drive concept’s high-level of efficiency, the car offered other advantages as well. By reversing the polarity, the generator could be used as an electric starter motor, eliminating the need for the strenuous and hazardous hand cranking of the engine.

Before the end of 1901, Ludwig Lohner and Prof. Ferdinand Porsche had pulled off a respectable result by selling five Lohner-Porsche Mixte cars. With a selling price of approximately 14,000 Krone each, this made the cars very exclusive commodities. The purchaser of this initial series was Emil Jellinek, the well-known general agent of the Daimler engine company in Stuttgart-Untertürkheim and the inspiration behind the first Mercedes (named after his daughter) only the year before. Despite this contact, a cooperation agreement to supply Mercedes engines failed to materialize and only seven Lohner-Porsches with Daimler engines were built. From 1903 onwards, petrol engines from Panhard & Levassor were used because the large French automotive manufacturer had acquired the license rights for France, Great Britain and Italy from Ludwig Lohner.

At about the same time, Prof. Porsche again significantly modified his cars’ drive concepts. For the weight reasons and to reduce production costs he dispensed with the purely electric driving capability and shrunk the battery to a minimum for initiating the starter motor. He replaced the missing energy storage unit with another innovation. The generator, designed as a stationary armature machine, was fitted with an electro-mechanical speed regulator patented as a “device for automatically regulating electric generators.” Prof. Porsche also ushered in a further development in wheel-hub motor technology. A redesigned hub casing allowed the kingpins to be relocated closer to the center of the wheel. This steering geometry, patented in May 1902, significantly reduced the effect of road impacts and the effort needed to turn the steering wheel. To reduce the unsprung mass of the wheels, Prof. Porsche also reduced the diameter of his wheel-hub motors, which he compensated for by using wider windings.

In April 1902, having incorporated these improvements, Prof. Porsche took his place on the starting grid for the Exelberg race. His two-seat Mixte racing car was not only visually impressive due to its modern proportions but impressive on the track, as well. His Lohner-Porsche seemed to cope effortlessly with even the steepest gradients of the 4.2-km gravel road leading up to the Exelberg, and it emerged as the victor in the large car class. Porsche received additional high-profile publicity in the autumn of 1902 when he chauffeured Austrian Archduke Franz Ferdinand in the Lohner-Porsche during a military maneuver. The aristocratic passenger seems to have liked the vehicle with its elegant touring body. Soon after, Prof. Porsche received a thank you letter testifying “just how satisfied in every respect his Imperial Majesty” was after the ride.

Despite these impressive demonstrations, sales of the Mixte production variants remained far lower than expectations. With only 11 hybrid cars sold, the return on investment was not on par with the enormous technical development costs between 1900 and 1905. The main problem was undoubtedly the high sales price. Depending on design and equipment, a Lohner-Porsche Mixte cost between 14,400 and 34,028 Krone, in some cases making it almost twice as expensive as comparable, conventionally powered motor vehicles. This was compounded by the high maintenance cost of the complex drive system that was unable to keep pace with the ever increasing reliability of normal petrol cars. Pure electric vehicles, however, were economically more successful. Approximately 65 Lohner-Porsche electric cars were sold during the first five years of series production to the end of 1905.

The reincarnation of the Semper Vivus

In November 2007 the Porsche Museum embarked on one of the most interesting and challenging projects in its history: the construction of a faithful replica of the 1900 Lohner-Porsche Semper Vivus. Even 111 years after its invention, building the world’s first functioning hybrid car was a great challenge for all. Ultimately it was not just about an extreme attention to visual details but also achieving the same performance as the original. The Porsche Museum entrusted the workmanship to a team of experts led by coachbuilder Hubert Drescher, who had already proven his competence in numerous difficult restoration projects. As with a number of racing car projects, the aluminum body of the Porsche Type 64 museum exhibit originates from the Hinterzarten coachbuilder workshop, as well.

Exhaustive research in various archives the across Europe was the first step. The outcome was a handful of black-and-white photos and an original technical drawing serving as the project’s foundation. As with Prof. Porsche, the Semper Vivus replica initially began as a blank sheet of paper. This meant that in addition to a good deal of imagination, the project required extensive research and calculations in order to be faithfully recreate an accurate and working likeness of the electric wheel-hub motor. Since no specifications or other helpful records had survived, experts initially created ready reckoners and design drawings on graph paper in the time-honored fashion. This involved the painstaking study and laborious measurement of photos and drawings. As there was no functioning wheel hub motor in existence, technical details such as performance and range had to be resurrected and calculated from scratch.

When it came to selecting materials, coachbuilder Drescher took his inspiration, among other sources, from coaches and carriages from the dawn of the 20th Century. This required the assistance of experienced suppliers who were entrusted with the manufacturing of the special materials. The fully functioning Semper Vivus replica, which took approximately three years to build, does not solely include replica components. For example, it was possible to fit some original components including combustion engines.

Today, Prof. Ferdinand Porsche’s innovative spirit lives on at Porsche AG’s Research and Development Center in Weissach, Germany where the company is applying its engineering strength to develop various hybrid systems. Porsche’s first production hybrid, the 2011 Cayenne S Hybrid SUV, is on sale in many markets including the United States. Its parallel full hybrid system will be adapted for use in the Panamera S Hybrid that goes on sale later this year with a U.S. MSRP of $95,000 (excluding destination). Porsche engineers are busy developing its 911 GT3 R Hybrid racecar for further competition while continuing work on the 918 Spyder plug-in hybrid super sports car the company first showed at the Geneva Auto Show in 2010.